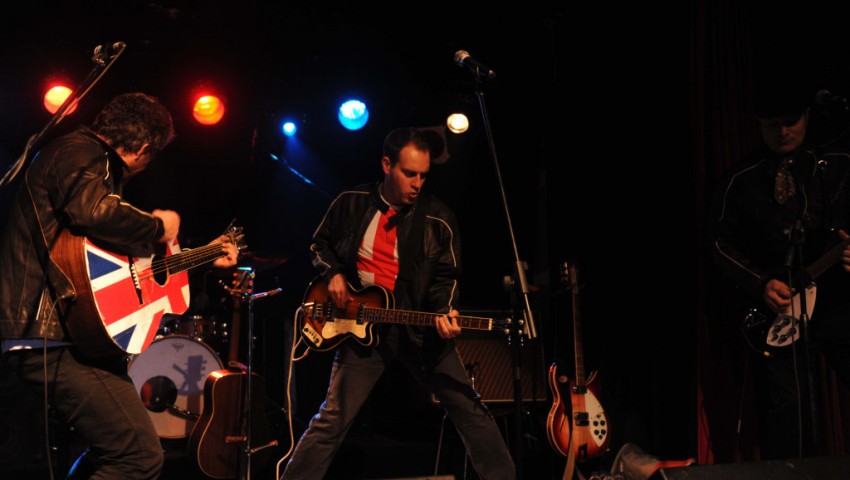 Picture it: London, 1963. The Swinging ’60s are in full swing. The kids can’t get enough of the new pop sound made famous by The Beatles, Gerry and the Pacemakers, Herman’s Hermits and The Cocksure Lads.

Never heard of The Cocksure Lads? There’s a good reason for that.

“Initially, and this is early ’90s when Moxy Fruvous was just starting out, I wrote this song that was like a parody of that early-’60s Britpop style,” said Murray Foster, who sang and played bass in the satirical Canadian pop act. Everyone liked the song and they wrote a few more like it, yet the tracks never gained traction.

“But Mike (Ford, singer-guitarist-pianist) and I loved that genre so much that we just kept writing songs for this band. And eventually, by sort of the late ’90s, it had become known as The Cocksure Lads, just between he and I. But all we would do is write songs and sing them on the other guy’s answering machine just for a joke.”

The joke didn’t stop at the music. They also created an entire mythology around The Cocksure Lads, four blokes from Newcastle who wrote those catchy pop ditties filled with inane lyrics until their sudden 1968 breakup. (The incident involved an exposed rear end, a fistfight and Queen Elizabeth.)

Eventually, Foster and Ford decided to record those songs for posterity, joined by Tim Bovaconti on lead guitar and Blake Manning on drums. The first album, The Greatest Hits of the Cocksure Lads, 1963-1968, was released in 2010. On Friday, they’re celebrating the release of their second album, Mad Lad Plan, with a party at Revival Bar.

What kept the project going for so long was that Foster and Ford had so much fun with the music, belting out songs with titles like “Mushy Peas,” “Wellies in the Bath” and “A Case of the Dropsies.” Plus, they could embrace the sound they loved without fear of sounding dated.

“As a songwriter, it’s very liberating to write in the style of the golden age of pop music, because it opens up these lyrical and musical possibilities that have kind of been closed off in the last 50 years of pop writing,” said Foster, who also plays bass with Great Big Sea.

“Like diminished chords, for example. You can’t really write pop songs these days with diminished chords ’cause that kind of sophistication has kind of fallen out of pop music. So we can unabashedly write more complex songs.”

When it came time to shoot a music video, they decided there was enough potential in The Cocksure Lads to turn their story into a feature-length film. But that required some adjustments to the Lads’ narrative to avoid well-worn 1960s clichés.

Instead it’s set in modern-day Toronto, with the band about to kick off their first North American tour. But on the morning of their first show, they get in a fight over royalties and break up. The movie follows their adventures over the course of the day as they wander the city separately and learn “what it means to be a band.”

Parody bands have a tradition of starring in their own movies, notably Spinal Tap and The Rutles. But their films were mockumentaries and Foster wanted to tell a new story: “Spinal Tap did 96 per cent of the jokes that are possible in a rock mockumentary. There’s just so little ground left to cover.”

The project is being crowdfunded, first through Kickstarter and now through the band’s website, and filming is set to start in April.

The Cocksure Lads have planned a full-on spectacle for their release party Friday, with fire-spinners, aerial acrobatics, go-go dancers, magicians and fake fortune tellers. They hope it will become an annual event.