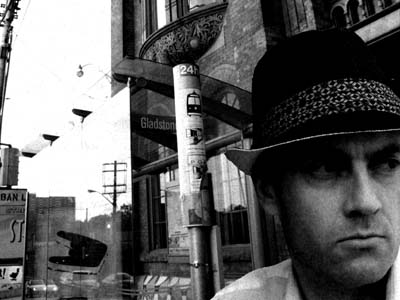 Noir seems to be coming around in popularity again for some reason. I’m not really sure why. Film noir had it’s heyday in the 40’s and 50’s after all, and noir crime fiction 20 years before that. Applying noir cliches and stylings to different things seems to be gaining in popularity, though. I’ve even heard there’s a superhero comic book series out now called X-Men Noir. Go figure.

Toronto Noir, the play, is based on Toronto Noir, a collection of short stories that came out last year. It’s exactly what the title implies: noir stories, set in Toronto. I haven’t read the book, but after seeing the play, I think I might like to.

The play is based on three of the stories from the book that run concurrently: one about a stand-up bass player (Great Big Sea bassist Murray Foster) who has to dispose of a body ’cause of a dame; one about a bar owner (Jack Grinhaus) who has a run-in with a cop (Adrian Griffin) whose wife (Alicia Johnston) he’s having an affair with; and a failed actor (Sarah Mennell) who has an attack of jealousy when a much younger recent theatre grad (Emily Andrews) who idolizes her gets a part in a movie. And, of course, all are set around Toronto: respectively, in the Humber Loop, the Distillery District and the St. Lawrence Market.

It’s quite a cast; as a whole they’ve got a number of TV and movie roles to the credit along with a mess of big theatre roles across Canada, the US and the UK. Oddly enough, though, it’s Foster, who’s best known for being a member of Moxy Fruvous and has been the bass player with Great Big Sea since 2002, who steals the show. His segment is the best, and he uses his double bass to great prop effect, mostly as a stand-in for the body he’s dragging around, and he deftly throws in a few tunes to boot.

The problem is, the other two stories just aren’t as good. Grinhaus spends most of his time showing the cop around the unlicensed bar and boxing ring he has; there’s a brief sparring match between the two, but no real tension. Mennell’s story has a few laughs, many of them from Marilla Wex playing Mennell’s boss at the “Honey Hut,” but Mennell’s character mostly comes across as a terrible person who can’t cope with her jealousy of Andrews’ character. Noir protagonists are frequently flawed and only occasionally redeemed in the end, but are still usually likable. Mennell’s character really isn’t (maybe you have to be an actor to really get the insane jealousy, I don’t know), and while Grinhaus’s character is likable enough, his story just isn’t that interesting and the climactic “twist,” if you can call it that, is pretty weak.

The on-stage DJ is a nice touch, however, and the way the scene changes between the three stories is quite good; none of the actors really leave the stage, they just freeze in the background and one of three photos, like the one above of Foster, on a big wheeled placard is shown to indicate which story is up. It’s rather skillfully done, and it’s never confusing which story is going on, nor is it particularly jarring switching between them, a nice accomplishment.

Still, if this play were re-imagined as a vehicle for Foster to star as his Plunk Henry character, I’d have liked it a whole lot more.