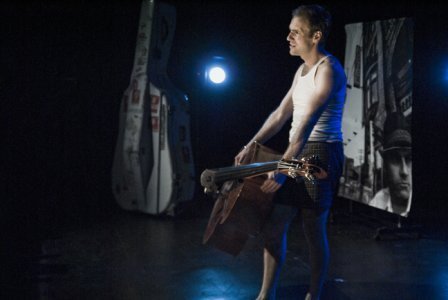 On the night of the Great Lightning Storm of ’09, we were tucked away in the sweltering Theatre Centre on Queen West, watching Toronto Noir and wondering if the thunder was coming from inside or out. The dramatic weather paired perfectly with these moody tales of love, jealousy, and murder that were adapted from a collection of short fiction published last year under the same name.

Three of the sixteen stories in the book were brought to life in the play, and all took place in cozily familiar corners of the city: Humber Loop, Distillery District, and St. Lawrence Market. The three storylines unfolded in parallel, taking turns in the spotlight, which was accomplished by smoothly rolling props and backdrops in and out.

The darkest and most interesting saga was probably the one of Plunk Henry, starring Murray Foster of Moxy Fruvous and Great Big Sea fame. As his character travelled from gig to gig to elevator shaft to drainage ditch, Foster charmed the audience with his wry delivery, striking stage presence, and seductive bass-playing. The other two threads were less mysterious, but the one that took place at a Denzel Washington movie shoot next to St. Lawrence Market turned out to be the most entertaining, thanks to a hilarious comedic performance by Marilla Wex. We couldn’t get enough of her.

As the cast took their bows, the world was ending outside. Flashes of lightning illuminated the night sky like strobe lights and the rain poured down. Climbing onto the streetcar at Dovercourt, we half expected to see Plunk Henry struggle on behind us, dragging a double bass case that looked suspiciously heavy.