NOW HEAR THIS: Fortunate Ones bring Bliss to N.S. 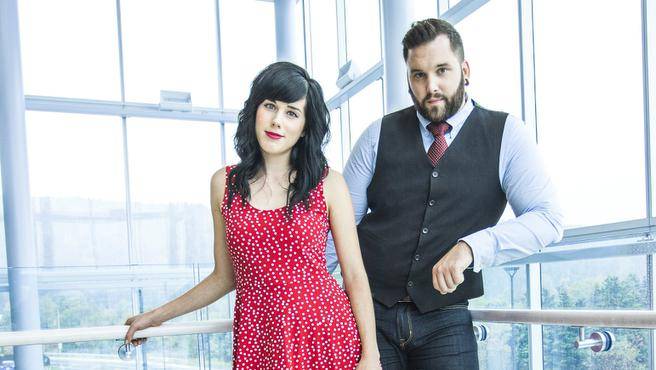 By Stephen Cooke
The Chronicle Herald

Newfoundland duo Fortunate Ones lived up to their name when they scored a last-minute opening slot for Celtic pop veterans the Waterboys at Casino Nova Scotia in 2013.

Andrew James O’Brien and Catherine Allan had only been using the name for a couple of months at that point, but they instantly made some new fans with their smartly matched harmonies and insightful tunes, and left many wondering when the two would have a record of their own to preserve them.

Now the wait is over, and Fortunate Ones return to the mainland with The Bliss, and a pair of Nova Scotia shows on Saturday at Evergreen Theatre in Margaretsville, and Carleton Music Bar & Grill in Halifax on Monday.

They will be joined by Juno Award-nominated Prairie songsmith Del Barber, who is doing a run of Maritime gigs with them before they head to Ontario and Quebec for a handful of shows.

It is also the first release on Rose Cousin’s new label Old Farm Pony Records, which isn’t a bad way to get started when you’re trying to make inroads across the country and beyond.

“We’ve known Rose for a couple of years, and in that time, she’s been a really good friend and kind of a confidante, and a mentor in a lot of ways,” says O’Brien. “Even before we really knew her, we were trying to model what we were doing on what she had done, because I remember when We Made a Spark came out, it was all you ever heard about, in every magazine and on every radio show.

“I remember thinking, ‘I want our record to have that kind of attention.’ Obviously, she’s been at it a lot longer than we have, and she has a great rapport with everyone she meets, so there’s no substitute for the work she’s done. But we both said we wanted that kind of trajectory, and if there’s anyone to model yourself after, it’s her.”

The double-edged sword of wanting to be a successful Newfoundland musician is the fact you have to spend so much time away from the home you love, and which informs your music.

But Allan and O’Brien are up for the adventure, which is part of the inspiration for the album’s title. According to Allan, life on the road presents challenges as artists and as a couple, and in those circumstances, you source your bliss while “making peace with and finding joy in our crazy travelling life together.”

Adds O’Brien: “I think it’s finding moments. I don’t think there’s ever this final thing where you reach it and that’s it. It’s more about the pursuit, and the title is more about a journey toward this kind of bliss.”

To them, their songs are about appreciating the moments of sadness as much as the moments of joy, as the former make you identify and welcome the latter that much more.

With like-minded attitudes, the duo say the whole of Fortunate Ones is definitely greater than the sum of its parts, with O’Brien’s lyrics and Allan’s musical training combining to create “a deeper well,” as he puts it.

“I’d never really thought of myself as a songwriter, because I was never all that happy with my lyrics, which can be problematic,” Allan explains. “But there are always these melodies going on in my head, so to be able to combine that with Andrew’s sensibility for lyrics is really cool. Some of these (new) songs were originally Andrew’s, some of them are co-writes, and some of them we did with a friend in Toronto, Murray Foster.”

Foster, a former member of Moxy Fruvous, met Allan and O’Brien in his more recent role as bassist for Great Big Sea, so he came in already knowing a thing or two about combining pop smarts with Newfoundland folk vitality.

“He was just on Dragons’ Den with his movie The Cocksure Lads, that he wrote and directed, and he got funded!” Allan grins.

Adds O’Brien: “He was a great catalyst for the writing process, too.”

“He’s a great facilitator, and he would challenge us to push ourselves, and it definitely worked.

“He co-wrote some of the songs that I’m most proud of on the album.”

Allan adds that “we sat down maybe three or four times with him, and wound up with three songs on the album. That’s a pretty successful run, in my mind.”

Both agree that it’s great to have friends like Ledwell, Cousins and Foster to mix up the duo dynamic, but for the most part, the bulk of what Fortunate Ones do is done as a working couple, making music and handling the business side of the equation.

“Ideally, it makes you stronger, and I think that’s what’s happening with us,” says O’Brien. “We’re getting ready for a big tour, rehearsing and trying to get our ducks in a row as far as making this a successful independent release.”

Adds Allan: “There are a lot of tasks, and we divvy it up. You have to delegate. It has to happen like that, but we do have people around us to guide us in the right direction, so we know what we have to be doing every day. We’re really lucky for that.”

For more on Fortunate Ones, and to get tickets for their upcoming shows, visit fortunateones.ca.