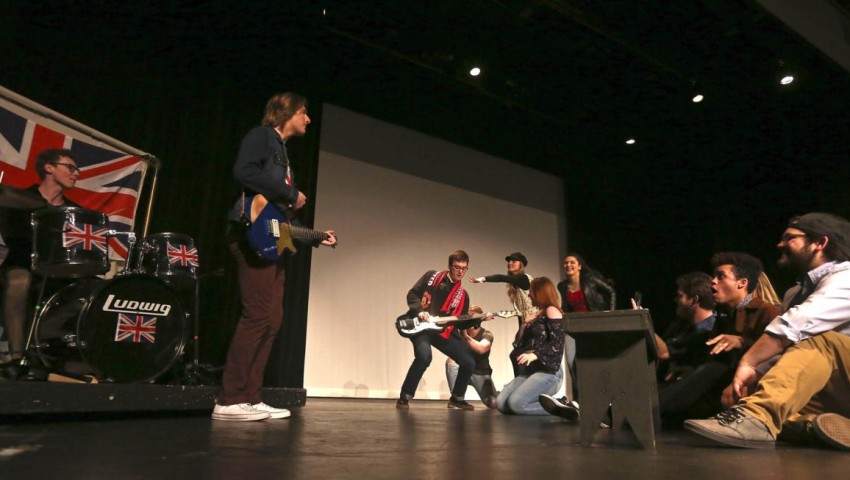 DECATUR — No one has ever played the character of Blakey in the new musical “Chelsea Sunrise.”

And Jordan Luty is okay with that. “I bring something to life that has me in it,” he said.

The Millikin University cast will be the first to perform the musical “Chelsea Sunrise.” They will present the play March 22 through 24, at the Albert Taylor Theatre in Shilling Hall.

The author of the play, Murray Foster, is a Toronto-based playwright. He has been in contact with the Millikin producers during production. “He takes what we give him,” said actress Kelly Cunningham. “It’s been a very collaborative experience.”

The lack of an example has been a challenge for the students of School of Dance and Theater, but one they appreciate. “This is a brand new musical,” Luty said. “We only know our script, so there’s not much to research since it is a developing project.”

The cast was given the script and little explanation. Future plans for the musical will include a performance by Sheridan College and their Canadian musical theater program. “They are doing a fully produced production,” said choreographer McKena Silva. “We are doing a bare-bones production of it, which means we are void of technical elements, no microphones, sets or costumes. Everything you see on stage came from us.”

This type of production does have its benefits. “Like not spending a lot of money,” Cunningham said.

As the School of Dance and Theater begins to grow, the producers and students are focusing their creativity on various productions and honing their craft. “It will have more bare bone style productions,” Luty said.

“The reason for this is because we have a lot of students now,” Silva said. “To accommodate for all of the talented people that we have, we need to make more performance opportunities, but we don’t have the budget to do that.”

“Chelsea Sunrise” is an ideal production for the school. The new play allows the cast to have the freedom in ways they haven’t in the past. The play also fits the criteria of a spring musical. And all avenues of play production are allowed to take part in a new creation, such as the School of Music.

According to the cast, audiences will find something enjoyable in the musical. “It’s funny and kid-friendly,” Cunningham said.

The story follows a young musician who was born in the wrong decade. He is part of a quartet that plays only 1960s-style music. “They are retro,” Luty said. “They live in this glamorous lifestyle of the British invasion bands.”

The group performs to a live studio audience, where the leader of the band falls for a girl in a competing musical group. “There is a conflict of interest,” Luty said.

Set in modern times, the stage is filled with various styles of music. “What the antagonist performs is pure music of the now,” Silva said. “All he performs with is his phone, playing beats.”

The retro images versus modern day plays throughout the musical. “There is an amazing fusion between the retro 60’s-esque music and the technology and amazing things we can do with music now,” Luty said.

As the musical grows and travels to future venues, audiences may see something different. “Sheridan’s may be completely different than ours,” Silva said.

Millikin has been one of the few universities presenting works by new playwrights. “We have really been investing in these writers, because we want their work to be produced,” Luty said. “Using our abilities here at Millikin to showcase their material, they can see what they need to work on. We have a mutual benefit.”

Millikin’s contribution was to bring an ensemble to the production with movement and harmonies. “We had to create that something that didn’t exist at all,” Silva said.

The hope for the Millikin cast as well as the writers is for the play to make its way to Broadway. The modern culture mixed with the styles from 50 years ago has given the cast an opportunity to focus on what is important to them. How do you make your art?

“You have to pick who you are. Are you a boy band or in the present or you are an outcast,” Silva said. “But that’s not true. You can be anybody you want to be.”