Interview: The Lesters, “The Promise” 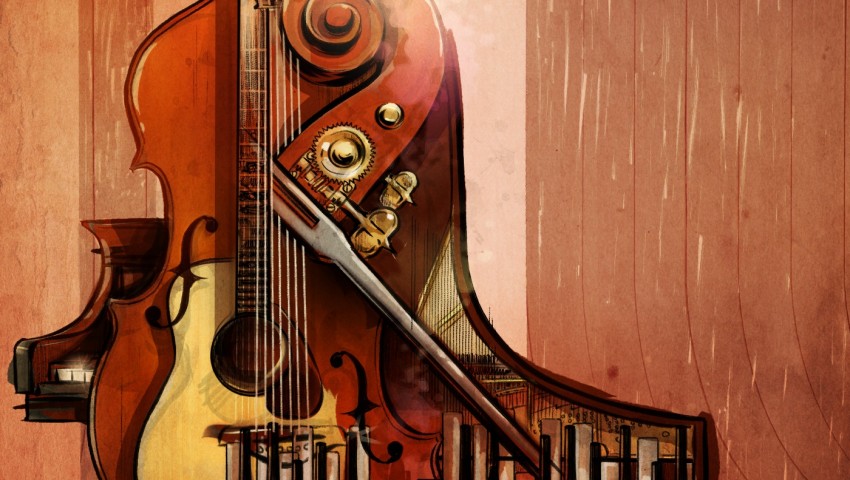 Great Dark Wonder
Tory Cassis, Murray Foster, and Jeff Ulster have each enjoyed significant careers, but (as for other musicians) there were still some musical avenues awaiting exploration.  As The Lesters, they have been walking one of those avenues (mixing folk, jazz, and pop) for some fifteen years now, and finally are releasing their debut EP.

Team GDW are most familiar with Murray Foster’s work with Great Big Sea (and we were thrilled to meet him in person last spring in Sellersville, PA, during his brief tour with Alan Doyle).  So, his foray here into upright bass is a welcome delight.  And I’ve enjoyed getting acquainted with Tory Cassis’ mellifluous singing and jazz guitar and Jeff Ulster’s fabulous stylings on piano.

The album opens with the title track, starting off softly enough and gradually building into a gorgeous jazz ballad.  “She’s Always on My Mind,” a lovely ode to love, follows.  “Forget” brings some uptempo moments to the album, with a terrific electric guitar solo that brings just the right amount of funk without overstepping the overall mood of the project.

With “Well Enough Alone,” The Lesters add a surprising touch of – not country, but we’ll call it blues, with a guest appearance on pedal steel by Bob Egan (formerly of Blue Rodeo) that adds a perfect meditative atmosphere to the song.  “Measure of a Man” finds Tory Cassis reflecting on what might happen if he cast everything aside and started fresh in a wonderfully gamboling tune, featuring some terrific links from all three musicians. The EP ends with “Don’t Want to Go Back Again,” a lovely reflection on making a relationship last.

As with so many other EPs, my one quibble with this project is that it ends too soon.  This is clearly the product of several years of collaboration by musicians who know each other well, and I think the future is bright for The Lesters if they choose to continue making music together.  This is a highly enjoyable album and I look forward to more (as I hint below).

Tory Cassis and Jeff Ulster were so generous to spend some time answering a few questions about the album, for which we’re deeply appreciative.

You’ve worked together off and on for fifteen years – what was the impetus to finally release an album?

We spent so much time learning and performing great songs by other artists and composers. There are lots of people out there doing jazz standards – some fantastic musicians who are masters of their craft. We asked ourselves – what makes a song something The Lesters would do? And what’s unique about how The Lesters interprets a song?

We’d each had lots of individual experience writing songs/composing music. We thought – what would we sound like if instead of interpreting other composers, we put something new out there?  How would we work together? Would it resonate with people? So we started writing, bringing songs in. And it turned out we really liked writing together, we dug each other’s musical ideas and we decided to bring it to an audience. And here we are!

Your website mentions that you spent a number of years playing jazz standards from the 1930s and 1940s (and is how you originally began playing together) – what drew you to that era of music in the first place? (And any chance some of those standards might make their way onto a Lesters recording one day?)

It comes down to a love of timeless songwriting. We do play some covers from other eras, although it’s true that our focus really has been swing music for a very long time. Tory headlined a swing band every Saturday night for years at the Reservoir Lounge in Toronto, and is a great jazz singer. He’s also a guitar player, and he wanted to get more time in playing jazz guitar. Jeff went to Berklee and studied jazz piano, and playing in a trio is great fun for a pianist.  Murray had just finished a long run on the road, and wanted to introduce upright bass into his repertoire of skills. And we were friends – so it seemed natural to just get together and play, for fun mostly. That evolved into us becoming a gigging band.

A number of the lyrics on the album are really introspective in nature – the lyrics on “Measure of a Man,” for example, in which you muse on (among other things) “this grand malaise, the measure of a man.” Was this intentional on your parts, or was this where the songwriting process for this project took you?

“Measure of a Man” is an older song (of Tory’s) that The Lesters revived because it seemed to suit our sound and brought something original to our set. Lyrically it was intended to be a whimsical look at how often we measure ourselves by an arbitrary and always shifting set of standards. Also the impulse that I think crosses everyone’s mind occasionally that it would be easier to tear it all down and start from scratch. I don’t think we had an overall intention for the EP in terms of lyrics. We were just drawing ideas from personal experience and seeing where they led us. It is true that most of the songs are introspective but that wasn’t by design. I think the next collection of songs should be predominantly scifi based (yet to be discussed with the other Lesters).

Many listeners might not associate pedal steel with jazz, but sure enough there’s a gorgeous appearance by Bob Egan on “Well Enough Alone.” What inspired you to add some pedal steel to this particular song?  (It gives the song a bit of a Floydian feel, another great surprise!)

I think the songs on “The Promise” draw from different styles with each track. On “Well Enough Alone” I was feeling it in more of a country/folk style. When we were recording it felt like it wanted something that gave it more space and pedal steel brings a unique and incredibly soulful quality. Bob was amazing to work with. His talents contribute to so many beautiful recordings and it was a thrill to hear where he felt the pedal steel fit in the context of the song.

Do you envision The Lesters being an ongoing project, with future albums coming (including the aforementioned standards recording)?

We definitely see a future for The Lesters! Unless you write terrible things about us. Then it’s all over.  (Editor’s note to The Lesters: We wrote good things – so that means we’ll absolutely hear more from you… right?)

Seriously, we’re just as excited to write new material as we are in bringing what we’ve just done to new audiences. We’re chomping at the bit!

I think we would like to represent our love of jazz on a record, so I wouldn’t put it past us to add some lesser known but classic jazz covers on a future recording.

You have an album release event coming up on the 11th; are you planning to do any kind of tour for the new EP?

Lots going on with us – we’ve been keeping our heads down mostly- recording, writing, performing and trying to leave some room for the other important things going on in our lives. We thought we should get this album out, then think about touring next … but it all starts with the official launch of our first EP on Saturday November the 11th at the Monarch.