From bass player to community leader to filmmaker, Etobicoke’s Murray Foster brings his 20-year dream to the big screen 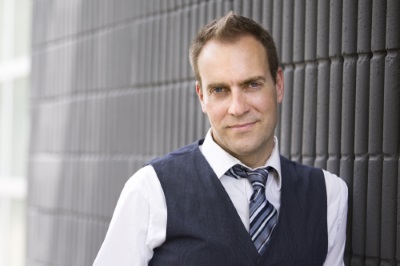 Murray Foster’s fictitious band 20 years in the making is now leading a British invasion in Canada – but it took more than a hard day’s night.

The former member of Moxy Fruvous, current bass player for Great Big Sea and field director for Etobicoke’s Our Place Initiative can add writer and director to his hefty biography after bringing The Cocksure Lads Movie to life.

His musical comedy follows four English blokes – The Cocksure Lads – who come to Toronto to kick off their first North American tour and end up breaking up 10 minutes after they arrive. Through the course of one drama-filled day and a series of misadventures, the lads learn what it truly means to be a band.

Foster said the whole idea of Lads came from a single parody of an early 1960s Brit-pop song he wrote with former Fruvous bandmate Mike Ford two decades ago.

Foster and Ford would leave quirky Beatles-esque song renditions on each other’s answering machines, and eventually began performing them live.

With only a few short films under his belt, Foster had to teach himself the daunting craft of screenwriting from scratch.

“I hit my head on a door frame and it just happened,” he laughed. “I learned as I went along. I would literally Google “how to write a screenplay.” I read Syd Field’s book The Foundations of Screenwriting, which is like the Bible.”

Once the words were on the page, Foster had to find the right actors to bring them to life. It took more than two years to lock down the non-union cast.

“We were looking for people with British accents, which made the process a little more painful,” he said. “I had to sit through innumerable terrible British accents. It was cringeworthy. There were a few times I wanted to fall into a trap door out of embarrassment on behalf of the person.”

Foster ended up flying two of the leads, Lyndon Ogbourne (Dusty) and Adam McNab (Reg), in from the U.K. The other Cocksure Lads, Luke Marty (Derek) and Edward Hillier (Blakey), are English ex-pats who have been in Canada since they were teens.

The film was financed through private investors, a Kickstarter campaign and Telefilm Canada. Foster also made a successful pitch on Dragon’s Den and shook on a $100,000 deal with two of the hosts.

“It was way scarier waking up the morning of Dragon’s Den than it was waking up the first day being a director for a feature film,” he said.

Murray said he quickly realized being the director required him to be the last line of defence in about 30 different categories.

“You’re basically responsible for everything,” he said. “As of week two, I went in super focused and had my antennae up making sure everything was going as it was supposed to be going.”

Producer Darren Portelli made the movie work with a limited budget. The crew filmed in 16 locations over 15 days.

He said it takes an army to put together a feature, and credits his team for the film’s success.

“You want people who are going to give 110 per cent, but they have to have just the right amount of experience,” he said. “That’s how I think we got the magic that we got. We found the right people at the right time.”

Both Portelli and Foster are proud of the end result. On Aug. 5, The Cocksure Lads Movie was the number one English-Canadian film at the box office.

“When Murray and I left the final colour correction session we were sitting there going ‘this is the movie that we wanted to make,’” Portelli said.

The Cocksure Lads Movie is currently screening at repertory cinemas across Canada. Foster hopes to invade TV sets next with a Cocksure Lads dramatic-comedy series that will document the entire rise and fall of the band.

When he’s not creating music or movie magic, Foster continues to promote civic engagement in Etobicoke through the Our Place Initiative.

A general meeting at the Etobicoke Civic Centre is taking place Thursday, Sept. 10 from 7 to 9 p.m. The public is welcome to attend and discuss the ‘get out the vote’ election strategy.

For more information on The Cocksure Lads Movie and upcoming screenings visit www.thecocksurelads.com

Visit www.ourplaceinitiative.com to learn more about Our Place Initiative.