From Früvous to film: Murray Foster makes his pitch 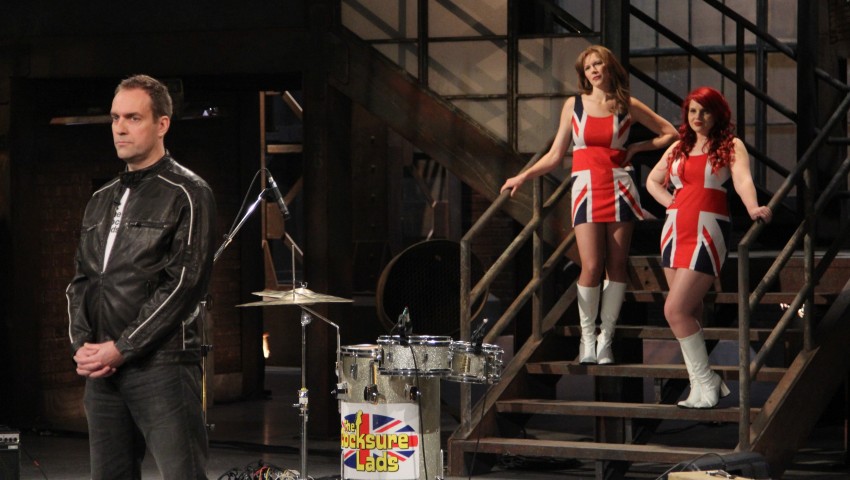 On Jan. 21, Toronto screenwriter and director Murray Foster – AKA bassist with down-east folk rockers Great Big Sea and, before that, founding member along with Jian Ghomeshi and others of the satiric band Moxy Früvous — pitches his film The Cocksure Lads Movie to CBC’s Dragons’ Den. Foster will be looking for $50,000 to help market the general release of his film in June.

Shot last spring, the musical comedy is about a British Invasion-style band who land in Toronto in the present day for their debut North American tour. No sooner do they arrive than they break up in a squabble over money. The film tracks the adventures of each band member over the course of the day with the burning question being, will they regroup in time for their big gig that night?

The film was born from 1960s Britpop-style songs that Foster and fellow Moxy Früvous member Mike Ford wrote over a 25-year period as a tongue-in-cheek tribute to the music they loved, crediting the songs to the fictitious band the Cocksure Lads. Realizing they had enough songs for an album, five years ago they recorded The Greatest Hits of the Cocksure Lads (1963-1968).

Next came a screenplay for a short film about the band in the style of the Beatles’ A Hard Day’s Night. That morphed into the full-length film which debuted in December at the Whistler Film Festival. It features British and Canadian actors as well as guest stars like Great Big Sea’s Alan Doyle.

We talked to the 47-year-old Foster about his film, the sexual assault scandal involving former band mate and fired host of CBC Radio’s Q, Jian Ghomeshi, and life with Great Big Sea. An edited transcript follows.

Q. Why did you want to do this film?

A. I think myself and Mike Ford were so in love with this band that we just said, “Let’s do a film” as if six weeks later we’d have a film. I think without that naivete I wouldn’t ever have walked down that road.

Q. In your director’s statement about the film, you say that most artists today are trapped in a stance of irony and self-consciousness that prevents true expression. Can you elaborate?

A. The 1960s, ‘70s, ‘80s were a time of unbridled self-expression and no self-consciousness. In Moxy Früvous we took crazy risks, played Coleco table hockey game on stage because we thought it was interesting and funny.  I felt the shift in the early ‘90s with the birth of grunge: there was something about that aesthetic that was very self-conscious that hadn’t existed before. And with Internet culture, this generation is very adept at creating personas that are projected on social media. It suppresses honest self-expression; you’re always checking through someone else’s eyes whether you’re cool or not.

Q. So how does the film work as an anti-ironic statement?

A. The concept of the Cocksure Lads slightly predated grunge, and because it’s conceived as a ‘60s band some of that naivete of the ‘60s was built in: the characters are naïve, open-hearted, through modern eyes kind of foolish. So even though the film was transplanted into the present day, some of that naivete managed to survive.

Q. The Dragon’s Den gang are pretty tough. Why did you think they might offer you financial support for this film?

(We’ve) already filmed the episode but without saying whether I got the cash or not, they were very intrigued by the celebrity content of the stars I had in the film and my musical background. And they don’t get pitched many artistic projects.

Q. When was the last time you saw Jian Ghomeshi?

A. I went to his father’s funeral (in early October, shortly before the scandal went public). I think he was heartbroken.

Q. You’ve said before that you had no inkling about Ghomeshi’s alleged activities before they were made public. How did you react when you heard the allegations?

A. Like the rest of Canada, I was gripped by the story. I spent a week going through comment sections of online newspapers. I think my emotional ride through it has been similar to a lot of Canadians’: shock and horror.

Q. What does the scandal tell us about ourselves as a country?

A. What we’ve learned is that there are a lot of women not speaking up, and that feels like a cultural shift. It feels like we’re not going back, that this discussion will never be suppressed again.

A. An amazing education in Newfoundland traditional music. It took me a day to learn the bass lines to the songs for that first tour but three years to figure out the dance groove of that music.

Q. Describe life with the band.

A. Living on a tour bus with Newfoundlanders for a Torontonian is an amazing immersion in this other culture. Initially you’re kind of overwhelmed by it: how loud and funny and different they are. Then you get into their head space, and ultimately I feel kind of bicultural in that I can speak Toronto but I can also speak Newfoundland.