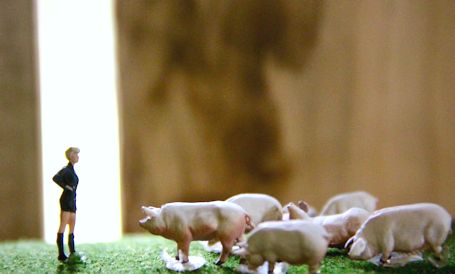 The Kincardine Record
By: Liz Dadson
What happens when a young woman says goodbye to the city and returns to the country to risk it all on her own barn of sows? This summer, the Blyth Festival is putting just such a heroine front and centre in “Judith: Memories of Lady Pig Farmer,” which opens Friday, June 29.

Based on the novel, “Judith,” by Aritha van Herk, this play was adapted for stage by playwright Heather Davies, with music by Davies and Murray Foster. The story follows Judith Pierce, a young woman and only child of a pig farming couple.

The year is 1972, and despite her parents’ pleadings to stay and take over the family farm, Judith wants none of it. The young woman longs for the bright lights and glass towers of city life. But when the big city turns out to be something she never anticipated, and her parents suddenly die, Judith is faced with a choice. Using her inheritance to buy a patch of land and a barn full of sows, she does everything in her power to make it on her own, and rediscovers the true meaning of home.

The play marks the return of director Jennifer Brewin, who previously directed “Dreamland” and “Two Brothers” for the Blyth Festival.

“This novel was written in 1976 and yet all the issues it highlights remain incredibly relevant today: farm succession planning, sustainability, and most poignantly, the ever changing and ever vital role of women on the farm,” says Blyth artistic director Gil Garratt.

“All of those issues are central to this moving story of one woman’s journey into adulthood, her growing understanding of the importance of community, and then we’ve woven in some live music, a couple of good fight scenes, and the arrival of piglets.”

While researching, the team made multiple visits to a handful of local women pig farmers and barns, learning first-hand the techniques of everything from small Community Shared Agriculture organic farms, to state-of-the-art, highly-automated barns. The female pig-farming community has been hugely generous and welcoming of these enterprising artists.

Photo used with this story, by Gemma James Smith