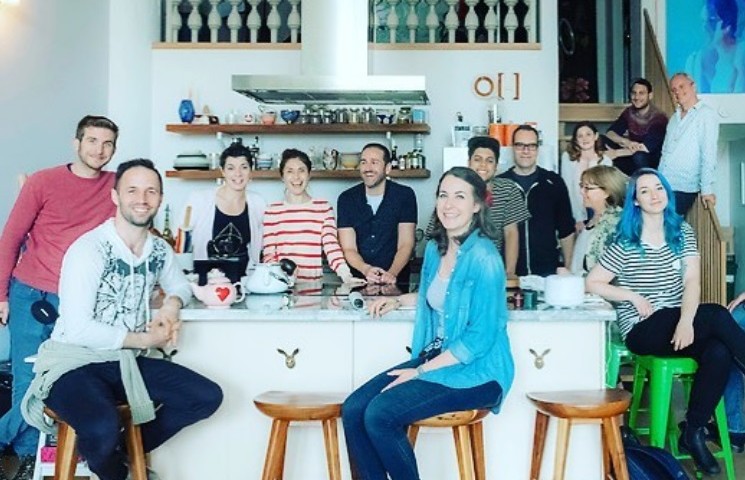 Broadway, and Toronto musical theatre powerhouse, Chilina Kennedy, alongside award-winning Canadian musical theatre artists Evan Tsitsias, and Sara-Jeanne Hosie, have announced the creation of a new Toronto based musical theatre company, ECLIPSE THEATRE COMPANY (ETC). ETC will be focused on the incubation, education and recalibration of musical theatre in Toronto through unique and innovative theatrical events, including a production of KISS OF THE SPIDERWOMAN at the former Don Jail in Toronto, March 2019.

The first 18/19 season CAPTIVITY consists of THE ETC LAB “HELD”, CALL IT LOVE (A SONG CYCLE) and a 5 performance Eclipse event KISS OF THE SPIDERWOMAN at the former Don Jail, in Toronto.

“I wanted to maintain my roots and connection to Canada especially at a time when the world is excited by our stories. And when you find the right alchemy between collaborators and artistic vision you have to jump at the opportunity. We can’t wait to contribute to the already rich artistic landscape of Toronto’s theatre community” – Chilina Kennedy, Artistic Producer, ETC

The vision of ETC is simple. Innovation, Creation, Education. Firstly, to instigate, investigate, and excavate original stories, in order to bring new Canadian work to life. Secondly, to re-examine and re-configure the classics. And thirdly, to foster and generate artists through education, collaboration, diversity and outreach. Every season ETC will consist of three theatrical experiences- The Lab, A New Canadian Work, and an Eclipse Event.

Chilina Kennedy (Artistic Producer) is currently starring as Carole King in the musical Beautiful in the Broadway production at the Stephen Sondheim Theater where she’s performed the role for two years. She is currently taking a leave to originate a role in a new musical Off-Broadway This Ain’t No Disco at the Atlantic Theatre Company. She spent the summer of 2017 in Toronto at the Ed Mirvish Theatre playing the role during the US National Tour. She is also a singer/songwriter with a debut album What You Find In A Bottle. Chilina’s last appearance on Broadway was in 2012 when she played Mary Magdalene in Des McAnuff’s Jesus Christ Superstar, which also had successful runs at the Stratford Festival of Canada and the La Jolla Playhouse. Other US credits include the world premiere of A Gentleman’s Guide to Love and Murder, in which she originated the role of Phoebe at Hartford Stage and The Old Globe in San Diego (San Diego and Connecticut Outer Critics nominations) and Sophie in the 1st US National Tour of Mamma Mia!

Evan Tsitsias (Artistic Director) is the Co-Founder/Co-Artistic Director of Directors Lab North, a sister program to the Lincoln Center Directors Lab, of which he is an alum and now partnered with Luminato Festival. He is also the Co-Founder of the World Wide Lab, an International Directors collective. With that company, he has co-directed/created festivals in New York, Italy, Greece and Taiwan. In Germany he’s co-created/directed several immersive, site specific pieces. In Canada, Evan has directed for Angelwalk, Musical Stage Company, Impact Festival, Theatre Aquarius Studio Series, Summerworks, Fringe, Next Stage, Koogle Theatre and more. His plays include Aftershock and Strange Mary Strange (Best of Summerworks – Now Magazine), The Murmuration of Starlings and Unstuck (Frank Theatre Company). His short film Bagged, aired on the CBC, WIFT, DC Shorts and NSI.

Sara-Jeanne Hosie (Executive Director) has been working nationally as a theatre artist for over twenty years, and has received Jessie Richardson, Sterling Haynes, Ovation, and Critics Choice awards and nominations for her work. She dons many theatrical hats including acting, directing, choreographing, writing, producing, new play development and teaching. Sara-Jeanne just had the honour of playing Alison Bechdel in The Canadian premiere of FUNHOME. Originally from Vancouver BC, she now calls Stratford home. She spent two seasons at The Stratford Festival of Canada as an Associate Director alongside Gary Griffin and Robert McQueen. Some acting credits include Mary in Mary Poppins (The Arts Club) Les Belles Soeurs (Segal Centre/Theatre Calgary); Bakers Wife in Into the Woods (Neptune and Thousand Islands); Kate in The Wild Party, and Falsettos (Musical Stage Company); Slipper (ATP); All Shook UP (Drayton Entertainment); Rona in Spelling Bee, (The Belfry); and Velma in Chicago (Mayfield). Favourite directing credits include: My Fair Lady (Bluebridge Rep Theatre) ;Godspell (Arts Club Theatre) ; Buddy Holly Story (Chemainus Theatre) In June, Sara-Jeanne is directing the farce Out of Order for The Drayton Festival.

THE LAB is all about supporting and developing new Canadian musical theatre work. This is an annual event that brings together musical theatre creators to exchange ideas, techniques and methodologies.

The title and theme of this year’s lab is HELD led by the Artistic Director, Evan Tsitsias, ETC Associate Artist, Tracy Michailidis, Executive Director, Sara-Jeanne Hosie, and Dramaturg, Elif Isikozlu. This year’s LAB participants are Julia Appleton, Jacqueline Burtney, Georgia Bennett, Trevor Copp, Eric Craig, Jeremy Crittenden, Jasmine Chen, Emily Dallas, Colleen Dauncy, Ellen Denny, Jessie Fraser, Allegra Fulton, Murray Foster, Jill Gollick, Aaron Jensen, Alan Kinsella, Kieren MacMillan, Tracy Michailidis, Laurie Murdoch, Melissa O’Neil, Akiva Romer-Segal, Alex Sandoval, and Mark Weatherley. Over a short number of days, teams of artists will experiment and create a site-responsive piece which will be performed only once. The participants are not given any information ahead of time about the space in which the lab will take place. They are only provided with the theme. This entire project is an exciting experiment that has no defined outcome other than the process of creation and the hope that we might incubate something in the future. This will culminate into a small invited sharing of the work.

With its mandate focused on DEVELOPING A NEW CANADIAN WORK annually, ETC through a series of workshops, will foster and produce a new piece.

First up, ETC will present CALL IT LOVE, a narrative based on the Chilina Kennedy’s 2015 album of original music What You Find in A Bottle. With musical arrangements by Rick Fox and new songs written specifically for this piece by Chilina Kennedy CALL IT LOVE tells the story of a woman balancing motherhood, relationships, and sexual desires. Exploring the ETC Season theme of CAPTIVITY, she grapples with feeling like a “Prisoner” (one of the albums’ most haunting songs) in her own life.

ETC is set to produce a full production of CALL IT LOVE in the Fall of 2019.

The first ECLIPSE EVENT, KISS OF THE SPIDERWOMAN, will be 5 performances at a historic Toronto venue, the former Don Jail, and starring some of Canada’s most renowned talents.
MORE DETAILS ON ECLIPSE THEATRE: WWW.ECLIPSETHEATRE.CA