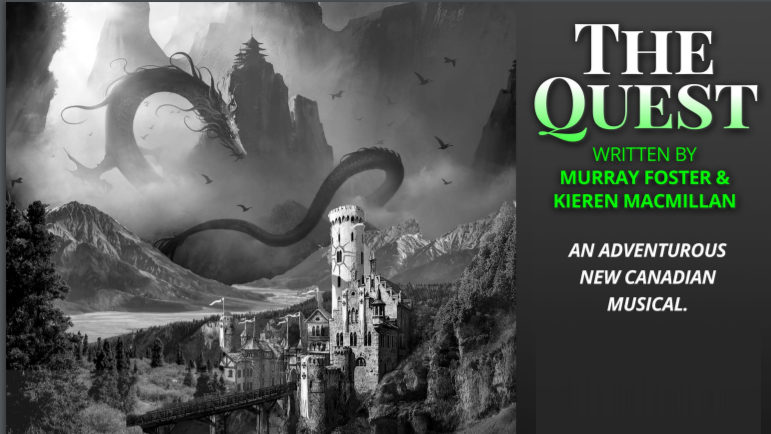 Worlds of drama and comedy; fear and bravery; heaven and hell, collide on stage in this year’s Canadian College of Performing Arts live theatre season. The ever-adaptable community at the College is welcoming nationally renowned directors to invigorate students and audience alike once again with live performance.

“When Worlds Collide on stage it makes for compelling theatre that will spark dialogue and reflection on the limitlessness of human adaptability,” said Managing Artistic Director Caleb Marshall on the season’s theme. With a reduced audience capacity of 50%, masked and vaccinated audiences will be safely welcomed to five exciting productions, concerts, and a festival, while at-home audiences will be able to share in multi-cam live streamed options.

For those who can’t wait to experience live performance again the CCPA Studio Ensemble is jump-starting the season with a live cabaret, THE ONE: real love… but faster, on Saturday, September 25, 7:30pm at the CCPA Performance Hall, and livestreamed online. Tickets range from $10-$30 and are available at ccpacanada.com/tickets/.

The season officially kicks off October 21 through 24, with the unique Secret Love in Peach Blossom Land by Stan Lai (Lai Sheng-chuan), a Chinese masterwork where comedy and drama clash. Can two disparate groups vying to control the same space be convinced to share it? Directed by Hong Kong native Derek Chan, the play depicts a timely theme in our increasingly polarized world. “As somebody who has struggled with believing that stories from my part of the world are just as valid over here, the prospect of sharing Secret Love with you all excites me to no end,” said Chan.

Up next, from December 5 to 7, award-winning director Cherissa Richards has heaven and hell collide in a downtown New York courtroom in the riotously funny, time bending, The Last Days of Judas Iscariot by Pulitzer Prize winner Stephen Adly Guirgis. The forces of good and evil are unwoven to determine whether history’s most famous sinner was the duplicitous master of his own fate, a much-suffering pawn, or just a man who made a mistake. Richards sees it as “a profoundly moving look at the difficulty of virtue and the necessity of mercy in an imperfect world.”

Fifty worlds collide for the Year Two students in Caryl Churchill‘s Love and Information, directed by Christopher Weddell, faculty member and director of last season’s Falseworks. Running from January 13 to 15, this show is a uniquely theatrical and thought-provoking play of shorts exploring the funny and complex intersections of knowledge, technology, communication, and our capacity for love in a rapidly changing world.

Bravery and friendship collide in a new Canadian musical, The Quest, created by Juno-nominated Murray Foster (Moxy Fruvous, Great Big Sea) and Kieren MacMillan (Master of Music Composition, Rice University), where the comfort of imaginative play must bravely confront the harsh realities of high school. This show provides students the chance to delve deeply into the development process, work directly with the creators, and imbue their own voices into a piece specifically crafted for audiences of their generation. The Quest, running February 11 to 19, is being led by one of Canada’s most sought-after musical theatre directors, Stephanie Graham. “The themes of self-discovery and the value of friendship are ones many of us can relate to, and this musical reminds us that being brave and facing our fears can often lead to astonishing things,” said Graham.

This dynamic and diverse selection of productions is only part of CCPA’s exciting year ahead. The remaining performances, including the year-end musical, Festival of New Works, and Concert of Remembrance, will be announced later as the College adapts to the shifting landscape of theatre’s new normal. To receive advance notice of CCPA’s performance schedule, and exclusive discounts, be sure to subscribe to either the three Studio Ensemble productions or the entire season, ranging from $42-$126, available now by emailing boxoffice@ccpacanada.com, calling 250 595 9970 ext.100, or visiting ccpacanada.com.

Coming off a highly successful 20-21 season, as one of the few performing arts colleges that continually adapted to operate in-person, Managing Artistic Director Caleb Marshall expressed, “how much the CCPA community appreciated the flexibility audiences continually demonstrate to support an art form that has been so challenged over the past 18 months, yet remains so integral to reflecting, inspiring, and nourishing our world.”